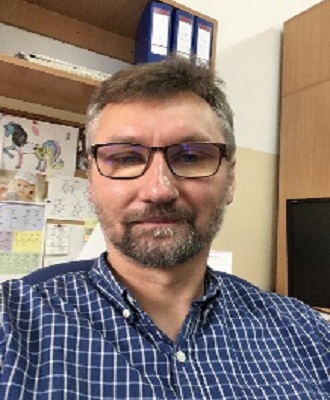 Maciej Maciejczyk
University of Warmia and Mazury in Olsztyn, Poland

Title : Coarse-grained models of nucleic acids and their applications

All-atom molecular dynamics (MD) simulations have been proved as a valuable tool providing insight into biomolecular processes at the atomic resolution. Despite the enormous growth of computing power since all-atom MD simulations of proteins were introduced at the end of 70’s there are still many biological phenomena with time-scales which are beyond the reach of all-atom MD models. This was the main motivation for development of so-called coarse-grained models of proteins and nucleic-acids in which groups of atoms are replaced by special interaction centers. Properly designed coarse-grained models of nucleic acids were able to give insight into many important long-scale biological processes like: double-helix formation, G-quadruplex formation or RNA tertiary structure formation.
The basics of methodology of construction of coarse-grained models of nucleic acids will be presented. The strength and weaknesses of two qualitatively different design strategies – physics and statistics-based – will be discussed. In particular three differently designed coarse-grained models of nucleic acids will be presented: physics-based dipolar-bead model; physics/statistics based NARES-2P model and statistics-based SimDNA. Several applications of different coarse-grained models of nucleic acids will be presented. The dipolar-bead model was used to obtain atomic-level insight into the process of formation of DNA double-helix. NARES-2P model was applied to explain specific physical properties of telomeric structures. Finally SimDNA model, which is still under development, was applied to the process of formation of DNA G-quadruplexes.

Dr. Maciejczyk studied Physics at Warsaw University, Poland and graduated as MS in 1999. Then he joined the research group of prof. Bierzy?ski at the Institute of Biochemistry and Biophysics, PAS. He received his PhD degree in 2007 at the same institution and joined prof. Scheraga group at Cornell University, USA as Postdoctoral Associate for three years. In 2010 he obtained the position of Assistant Professor at University of Warmia and Mazury in Olsztyn, Poland. In 2019 he was promoted to Associate Professor. He has published over 20 research articles in SCI(E) journals.